The idea of zines are new to me and are pretty goddamn revolutionary. Have ideas that won’t get published? Do it your self.  Want to write with your friends? Form a collective and get that writing out there. As someone that wants to get traditionally published one day, the idea of making zines is uncertain territory for me. The idea that I would not be taken seriously as a writer because my work appears in zines is terrifying.

I knew a couple of people going to LA Zine Fest and since Pasadena isn’t so far from my house, I decided to check it out. I had gone to LA Pages the week before which was my first experience with zine vendors. I fell in love with so many zines and the people that created them. The event was small and took up a community space next to a church in East LA. I thought LA Zine Fest would have a similar vibe. Oh was I wrong.

This year the event took place at the Pasadena Conference Center, which gives the idea that it’ll just be a large room. But the event was two floors, essentially the entire building. There were so many vendors peddling their zines, stickers, shirts, art. It was super overwhelming at the beginning but once I started slowly making my way around the booths, I calmed down.

As a woman of color, I know how hard it is to get your voice heard and get your message out there so I wanted to support women of color vendors for the most part. I met some amazing people and I want to highlight some. 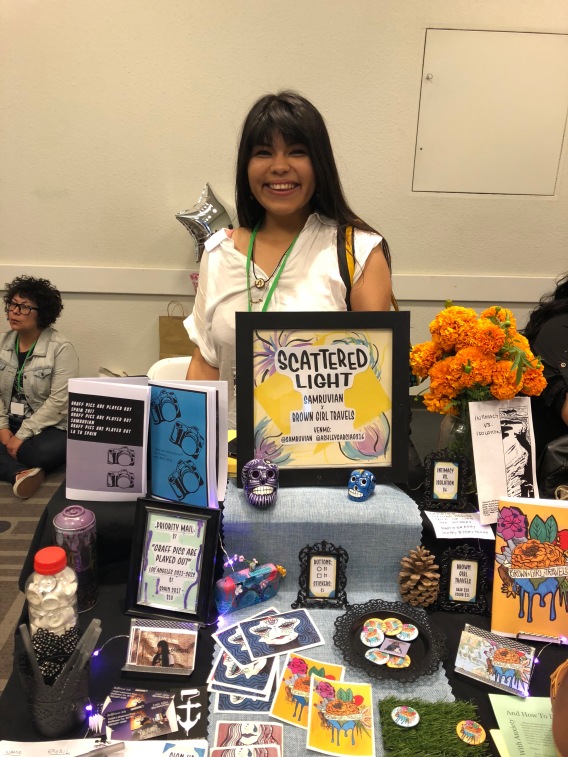 2. Brown Girl Travels has a very special place in my heart because it was the first zine that I submitted to and they published a piece I wrote about traveling to Tikal located in my parents’ home country, Guatemala. I finally got to meet Ashley, who put together the zine, in person and we connected instantly. I love when internet peeps turn out to be just as amazing in real life.

3. Shannen Roberts runs the site The Strange Is Beautiful which focuses on mental health awareness and self-care. She is also a musician that goes by Cusi Coyllur. Her booth was awesome because it was super interactive, from music demos on an iPod to Shannen taking pictures of new readers. I am a writer for the Strange Is Beautiful so it makes me happy when a new crop of followers appears.

Overall I left the zine fest broke and happy. You can check out this Instagram post to see all the vendors I visited that day.   I also left feeling inspired. I’ve been working on my own projects and the zine format seems perfect for them. So stay tuned and maybe one day I’ll have my own booth at LA Zine Fest.